How can we help you today?

Research from Dr. Adrian Sargeant tells us that surveying donors regularly is a key component to interpreting and improving your donor retention rates. Bloomerang's Engagement Surveys focus on New, Existing, and Lapsed Donors. Surveys to new and existing donors measure donor satisfaction, commitment, trust, and intimacy. The Lapsed Donor survey looks at why a donor stopped giving. Survey questions are based on Dr. Adrian Sargeant's research, taking out the guesswork and allowing you to focus on results, and action.

Activate Engagement Surveys so they are automatically sent out when a donor makes a qualifying transaction. To activate a survey:

Surveys are automatically sent to active donors (including individuals, organizations, and all active members of a household) when a qualifying transaction is made, and based on the acknowledgement status of the transaction. An interaction will be created on the donor's timeline when a survey is sent, and a second interaction is created if the donor answers a survey. Donors may answer all questions of a survey, or only some questions.

When at least one survey is activated, an email interest is created for Engagement Surveys. Donors may opt in or out of Donor Surveys through the Manage email preferences link on all Bloomerang emails. To rename the email interest:

NOTE: Only transactions entered after a survey is activated are considered qualifying transactions for New and Existing Donor Surveys.

After a survey is activated, it is sent based on donor activity:

An interaction will be created on the donor's timeline when a survey is sent, and a second interaction is created if the donor answers a survey. 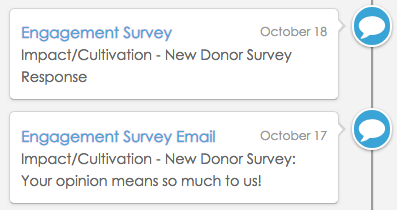 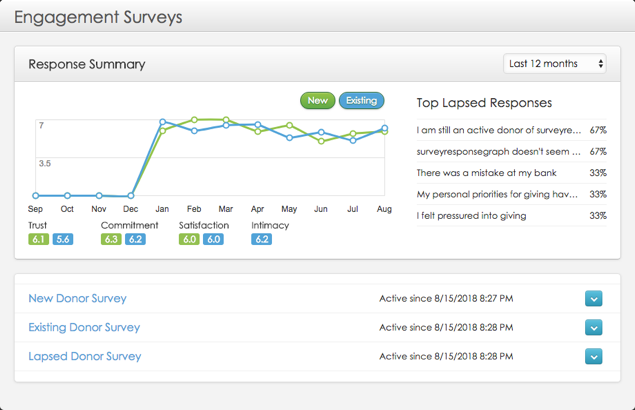 Cumulative survey scores are displayed on the Engagement Surveys dashboard so you can see how you are performing over time. The average commitment, satisfaction, trust, and intimacy is collected for each survey type so you can see how your donors collectively feel about your organization and which areas need improvement.

To see more detailed tracking and responses on each survey, open the survey and go to the Tracking or Responses tab.

Did you find it helpful? Yes No

Send feedback
Sorry we couldn't be helpful. Help us improve this article with your feedback.